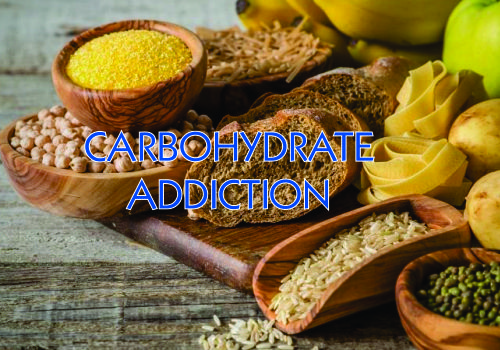 It is thought to be caused by an imbalance, an over-release of the hormone insulin, when carbohydrate-rich foods are eaten. Among its many jobs, insulin signals the body to take in food (triggers hunger) and to store the food energy in the form of fat.

Too much insulin being released, results in too strong an impulse to eat, too often, and a body that too readily stores food in the form of fat.

What is the ‘Carb Addiction’ Cycle:

Too many carbs elevate blood sugar, and any excess to the body’s needs causes it to respond by releasing the hormone insulin, the primary driver of fat regulation. Insulin does damage control in the form of telling cells to get the excess sugar out of the blood stream. This is accomplished by the cells converting the sugar and storing it as fat for use later.

Only later never comes when a diet is high in carbs; that fat will never need to be used as fuel, it stays stored. And those cells obligingly expand to accommodate it (ie you get fat!).

A diet high in carbohydrates can also mean that over time the cells become less receptive to the insulin, a condition called insulin resistance. The body is then forced to release more of it to control the blood sugar levels. And so the vicious cycle of addiction begins: more insulin to be fed means the body craves more of what the hormone feeds on (sugars), and triggers more hunger for the food that produces that most efficiently – you guessed it, carbs. The fatter you get, the more you crave the food that very possibly made you fat in the first place.

What are Bad Carbs?

To be perfectly clear, a lot of healthy foods are carbohydrates, like vegetables and fruits. But there are good carbs and bad carbs. The bad carbs that wreak absolute havoc on our bodies and can create addiction are refined carbohydrates, including:

Refined carbs and sugar can be very addictive. A review of the research published in the “Current Opinion in Clinical Nutrition and Metabolic Care” reported that lab rats, as well as humans, can find sugar even more rewarding (and addictive) than cocaine.

Look out for Part 3 tomorrow …